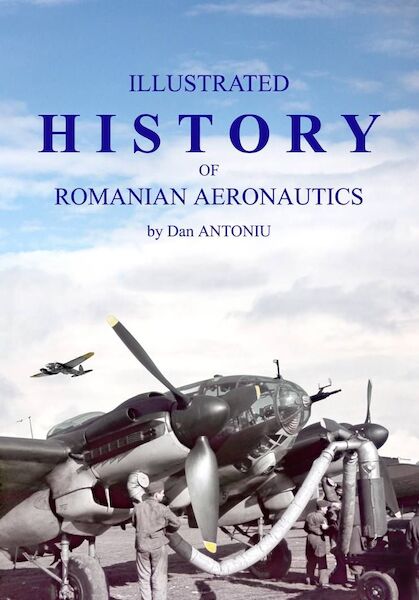 Illustrated History of Romanian Aeronautcs 1909-1948 (BACK IN STOCK!)

This product was added to our database on Wednesday 27 January 2021.

This bilangual book is quite large (A4 format) and good looking with its colour hardcover showing - on both front and back - photographs of Romanian aircraft. The quality of the paper and the clarity of the photographs is good. It lists 268 pages and 434 photographs, all black-and-white.

When you first open it you may have the impression that you`ve got an album, but better view it is as a chronologically arranged encyclopedia. It does have photographs on each page of the main section, but the point of the book is actually to list, by the order in which they first entered Romanian service all the planes from the very beginnings up to 1948. Even the planes that however briefly entered Romanian service are included like the one offs of the early years of aviation, prototypes, privately purchased planes that were later requisitioned by the military and even captured aircraft. For example, the B-24 Liberator that was brought down during Operation Tidal Wave, repaired with parts from the other downed Liberators, painted with Romanian markings and made fly-worthy does have its own page.

The text starts with a 2 pages (all text in the book is split between English and Romanian) Forward section, followed by a 6 pages chapter titled "Brief History of the evolution of aeronautics in Romania 1909 - 1948". Then, the main section begins at page 20 and ends on page 237. As said, this is arranged chronologically depending on when a certain aircraft version entered service, with small notes marking the start of each year. As a rule, each plane is allocated a page consisting of two photographs - arranged top and bottom - and a text section in the middle, split between the two languages. The text is not a commentary for the specific photographs on that page but on the aircraft type depicted there. It will generally mention the complete name of the plane, the engine it used, the date when it entered service (usually mentioning the separate stages where there were batches of the same aircraft type procured at different times), the operators, the date when it was taken out of service and a few other bits of relevant information depending on the subject. Sub-versions of a certain aircraft type tend to have their own sections. For example the Bf 109E-3 has one page and the Bf 109E-7 has another. Likewise, there are separate entries for the PZL P.11a, PZL P.11b, PZL P.11c and PZL P.11f. In regards to the number of photos per plane there are some exceptions. A handful of aircraft only have one photo each and a few aircraft (the IAR 80, JRS 79B and Bf 109Ga-6) have more than the customary two.á

The book ends with an Index (which is very usefulá if you want to go straight to a certain aircraft since in the book they are arranged chronologically, not alphabetically), a Glossary of the Romanian terms used in the English text (things like the names of institutions), a very interesting annex listing the manufacturer`s serial numbers and the registrations of aircraft in service that have been identified and a selective bibliography.