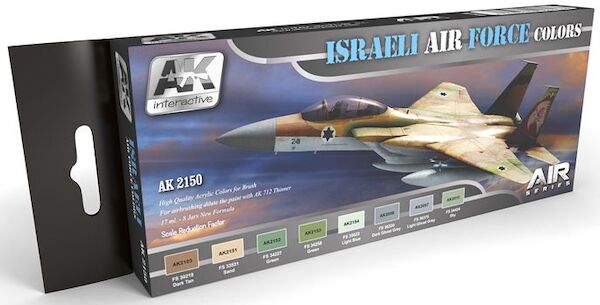 This product was added to our database on Thursday 30 August 2018.

After the Six Day War, the Israeli Air Force introduced a new camouflage scheme consisting of an upper surface pattern of FS 30219 Dark Tan, FS 33531 Sand, and FS 34227 Green, with the undersides in FS 35622 Light Blue. This desert scheme remained a standard for most of the IAF tactical aircraft and helicopters until the early 1980s, although many tactical aircraft introduced in the 1970s, such as the F-4E, carried this scheme until the end of their service. An exception was the A-4H/N, where the manufacturer used a different green tone for the camouflage pattern, ie. FS 34258 Green. The air superiority grey scheme consisted of FS 36320 Dark Ghost Grey and FS 36375 Light Ghost Grey, and was introduced with the entry of the F-15 at the end of 1976, for all aircraft assigned to high altitude missions, including the Kfir C2, E-2C and RF-4E. With the delivery of the F-16 in 1980, the standard desert scheme for combat aircraft was modified by replacing the FS 34227 Green with WW2 RAF Sky (FS 34424), and FS 35622 Light Blue with FS 36375 Light Ghost Grey, respectively.

The new scheme was later applied to the Kfir C7 and late C2 variants, and the F-15I.