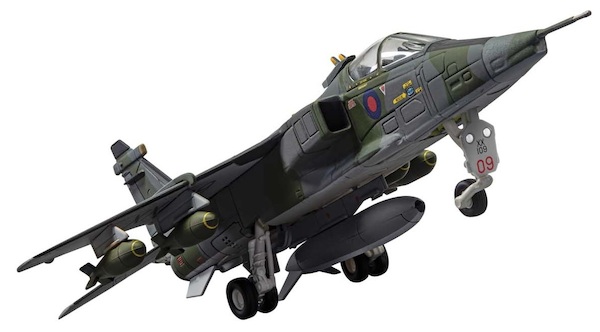 The aviation product of a 1960s Anglo-French collaboration, the SEPECAT Jaguar was a highly effective tactical strike/attack, close air support and reconnaissance aircraft, which went on to see service with the Royal Air Force for an impressive 33 years. Featuring a high set wing and long undercarriage, the Jaguar was capable of being operated from grass airfields and roughly prepared landing strips, an ability which was famously demonstrated in front of the British press on 26th April 1975. Flying from the nearby British Aircraft Corporation airfield at Warton, second production Jaguar GR.1 XX109 made a parachute assisted landing on the carriageway of the soon to be opened M55 motorway at Weeton, near Blackpool. BAC test pilot Tim Ferguson made a familiarisation pass over the landing area, before bringing the Jaguar in low over a motorway bridge and impressively slamming it down on the carriageway, as part of the Jaguar's ongoing operating trials programme. Once landed, the aircraft was taxied back to a semi-concealed position under the motorway bridge, where it was fitted with four bombs by armourers, to represent a full tactical weapons load for the aircraft. With the carriageway clear, the Jaguar blasted into the air once more, clearly demonstrating the operational flexibility of the RAF's new strike jet, with the pilot later describing the thrilling events as posing him 'no problems' and not being beyond the capabilities of the squadron pilot. Although the nuclear capable SEPECAT Jaguar's ability to operate from rough ground and motorways undoubtedly enhanced its operational effectiveness, this attribute was never actually called upon during its service career, with the M55 motorway landing in 1975 proving to be the most highly publicized demonstration of these impressive capabilities. With a number of TV cameras recording the momentous occasion, these videos not only show the Jaguar being operated in spectacular fashion, but also many members of the public appearing to be standing perilously close to the action at the side of the motorway, something which would certainly not be allowed in these current health and safety conscious times. The thrilling aviation events which took place on the M55 back in 1975 have also been beautifully captured by talented award winning aviation artist Simon Mumford, whose painting entitled 'Motorway Trials' was part of the 2019 Guild of Aviation Artists annual exhibition at the Mall Galleries in London. It shows the moment Jaguar XX109 came in for its landing on the M55 motorway, passing only feet from a bridge and seconds before its landing parachute was deployed. Spending most of its career as a trials aircraft, SEPECAT Jaguar XX109 is now one of the prized exhibits at the City of Norwich Aviation Museum, where she can be seen wearing a smart RAF No.54(F) glossy scheme.