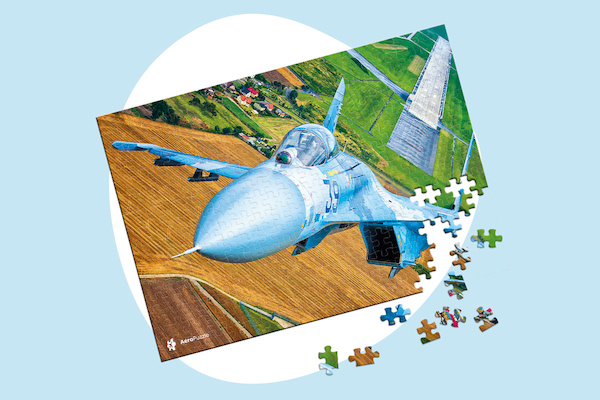 This product was added to our database on Friday 20 November 2020.

It was one of the most memorable shows in the history of LOTOS Gdynia Aerobaltic. In 2019, the legendary Su-27 appeared in Gdynia's skies, serving the viewers gathered at the airport in Kosakowo, with emotions at the highest level. After all, this plane is pure power. Soviet structure designed in response to the American F-14 and F-15 jets.

The first flight took place in 1977, and 8 years later the Su-27 entered service in the Soviet Air Force. The cost of one copy is $ 30 million. At air shows around the world, the Su-27 performs as the Flanker Display Team, and at its controls is the Colonel of the Ukrainian Air Force, Yuri Bu?awka. The pilot's outstanding skills were appreciated by, among others jury of the International CUMULUSY 2019 Aviation Plebiscite.

The author of the photo is S?awek "hesja" Krajniewski. It was taken during the Air-to-Air session during LOTOS Gdynia Aerobaltic 2019.

The puzzle consists of 1000 pieces and is intended for people over 14 years of age.