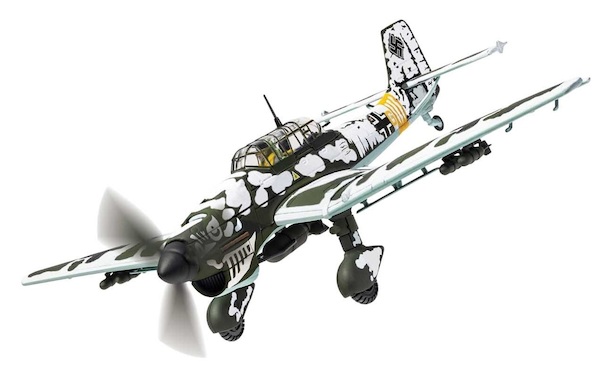 'Immelmann', Battle of Moscow, December 1941 Without doubt one of the most instantly recognisable aircraft of the Second World War, the Junkers Ju-87 Stuka may not have been the most effective strike aircraft to see combat during the conflict, but it was certainly one of the most feared. Capable of providing strategic, precision bombing support for advancing Wehrmacht ground units, the Stuka heralded the coming of war and as such, had been designed specifically to instil fear and confusion into enemy troops and the terrified population at large. Attaching a wailing siren, known as the 'Jericho Trumpet', to one of the undercarriage spats on the Stuka's airframe, only served to enhance the reputation of this aircraft, with its distinctive gull wings coming to represent the fearsome manifestation of Blitzkrieg! Although the Stuka had been found to be vulnerable against the modern fighters of the Royal Air Force during the Battle of Britain, it would go on to play a significant role during Operation Barbarossa, where its precision strikes were used to clear a path for advancing ground units along the vast front line.

This 3./StG.2 Stuka wears the standard camouflage of Black/green and Dark green over light blue, but has a roughly applied winter distemper to give it additional protection whilst operating during winter conditions. It also features a representation of gaping mouth artwork over the air cooler and above, which is described as 'Ghost Bones', making this one of the most distinctive Stukas to serve on the Eastern Front.