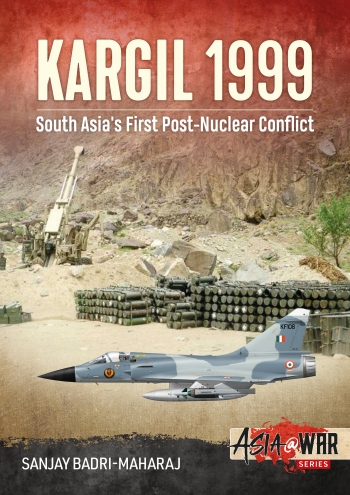 In 1999, less than one year after both countries tested nuclear weapons, India and Pakistan found themselves locked in another armed conflict.

In spite of a ray of hope for peace in February 1999, when the Indian Prime Minister, A.B. Vajpayee, visited Pakistan and signed the Lahore declaration, by April 1999, the two countries were effectively at war. From the prospect of improved relations and a chance for a peaceful resolution of differences, within one month the subcontinent was plunged into another war.

In a brilliant tactical plan, Pakistan launched Operation Badr which saw a brigade sized force of Pakistan Army troops and Islamist militants infiltrate into Indian controlled territory. Supported by Pakistani artillery and well provided with small arms, mortars, and anti-aircraft weapons, these infiltrators were able to entrench along ridgelines with commanding positions over Indian lines of supply and communications.

Once realizing the seriousness of the situation, the Indian government ordered its armed forces into a ponderous, but ultimately successful effort to evict the invaders. Facing treacherous terrain, and a well-supplied and entrenched enemy, the Indian Army troops supported by artillery and air force clawed their way up mountain heights to capture fortified enemy positions.

'Kargil 1999' is the first ever military history of this conflict in the English language. It examines the political and strategic situation in the run-up to the conflict, the precarious position of the Indian government, and the disconnect between the Pakistani civilian government and its armed forces. Moreover, it provides a detailed review of the state of the Indian and Pakistani armed forces as of 1998-1999, with particular attention to their organization, orders of battle, their air forces and air defence networks. Because the Kargil War of 1999 was the first conflict during which both India and Pakistan were in possession of nuclear weapons, this account provides a detailed review of their related potentials – including stocks of fissile materials, and delivery systems (manned aircraft and the burgeoning indigenous ballistic missile programs of increasing sophistication).

Finally, 'Kargil 1999' provides a detailed account of ground combat, which culminated in the Indian infantry storming the heights occupied by the Pakistani infantry, while supported by artillery and air force.

Illustrated by more than 100 photographs, maps, and authentic colour artworks, 'Kargil 1999' offers a military perspective of the first confrontation of the two declared nuclear powers of South Asia – a conflict that tested their political, military, diplomatic, and nuclear resolve.