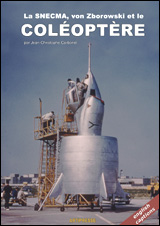 This product was added to our database on Tuesday 15 March 2011.

The Copeotere (Beetle) was an aircraft unlike any other, whose appearance strongly marked the fifties.
Originally designed by engineer Helmut von Zborowski who patented the concept, the prototype of the Beetle was developed by SNECMA (SAFRAN today). To validate the feasibility of an aircraft departing vertically on the sole thrust of its engine, SNECMA built the ATAR Volant who was the star at the Paris Air Show.

This is the story of this program that found its origin in the immediate post-war and culminated in 1959 with test flights of the demonstrator C-450 Beetle that tells Carbonel Jean Christophe in this book through family archives Zborowski and interview many participants in the program. Initial concepts of von Zborowski, nine free flights from Beetle C-450 , for the first time detailed the entire program is reviewed definition of an annular wing interceptor, program C-400 ATAR Volant , program C -450 Beetle and the numerous civil and military derivatives offered by the Technical Board Zborowski and hunters around the advanced C-450 by SNECMA. Even projects transforming the annular wing "in napkin ring," wing discoidal "flying saucer" are discussed in this book.
The impact of the beetle in the media is also studied.
In the appendix all projects identified as relating to the annular wing, they emanate from the team or von Zborowski SNECMA are listed and illustrated.