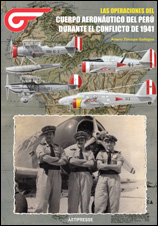 This product was added to our database on Wednesday 14 March 2012.

70 years ago an armed conflict broke out between Peru and Ecuador. Peruvian forces had a substantial fleet of air superiority and that influenced the outcome of the confrontation. The CAP (Cuerpo del Perů Aeronáutico) had a well maintained modern aviation equipment and a well-trained and led. In addition, he was at the forefront on several points concerning the doctrine of employment of air power.

Shortly before the war, the CAP had created a paratrooper unit, composed of both pilots and technicians junior officers. In this photo from November 1940, we see Lieutenant José Quińones Gonzales Abelardi (second to the right of other paratroopers CAP), with other paratroopers posing in front of a Caproni Ca 111 . Lieutenant Quinones died July 23, 1941 in the crash of his plane NA-50, while attacking the Ecuadorian positions in Quebrada Seca. Rather than bail out, he directed his plane on the positions of enemy machine guns, destroying them.

Since, Lieutenant Quińones is a national hero in Peru. The international airport of Chiclayo, and numerous monuments bear his name. This booklet tells the story of Peru's body aircraft during the war of 1941.