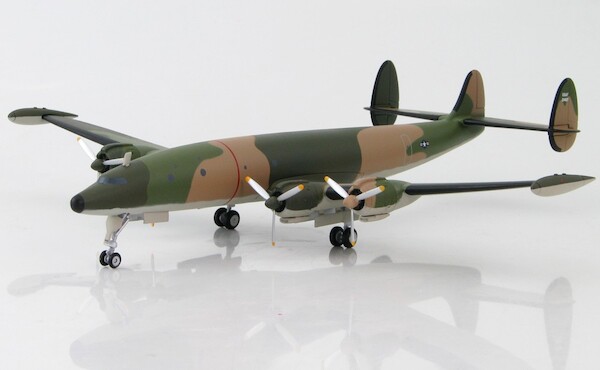 This product was added to our database on Friday 25 September 2015.

1/200 scale die-cast metal with minimal use of plastic.
All markings are tampo (pad) applied, no decals to discolor or flake.
Free-spinning propellers.
Most models have rolling wheels.
Landing gear can be removed or added.
Model comes with a display stand.
A brief history of the aircraft type and the airline is supplied with each model.

In 1954 the Lockheed EC-121 Warning Star was introduced and operated until 1978. These
aircraft were used as airborne early warning radar surveillance to work in conjunction with the
DEW Line (Distant Early Warning) Line. The USAF used these aircraft in Vietnam as electronic
sensor monitors and to detect enemy aircraft activity as well as a few other operations. These
aircraft were the forerunners to todayÆs E-3 Sentry AWACS. The USAF aircrews used the
nickname ôConniesö, a play on the word Constellation.

During the Vietnam War EC-121R Constellations were used to monitor enemy movements. On
June 4, 1969 EC-121R 67-21487 c/n 4480, former USN 143206, departed Korat RTAFB for an 8
hour on site orbit. Shortly after entering the orbit all 4 engines shut down without any warning and
the aircraft became a glider. Without pressure from the engines there were no hydraulics and the
pilot had to wrestle with manual controls to keep the aircraft from diving and/or rolling. Eventually
the engineer was able to restart the engines and they flew to the closest base at Da Nang, thus
becoming the ôDa Nang Gliderö. No explanation was ever reached as to why this occurred.