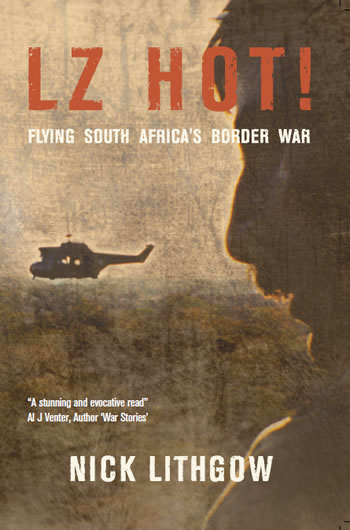 This product was added to our database on Wednesday 27 March 2013.

This book captures the experience of the South African Air Force helicopter pilot as never before; from 'rookie' to seasoned combat aviator in one of history's most intense counter-insurgency conflicts ľ the South African Border War.

Nick Lithgow's work relates the gruelling endurance of SADF National Service and its grind, grind, grind.... Until one day, helicopter drills with an SAAF Puma, saw him optimistically apply for pilot training. Called to Pretoria, Nick completed the mandatory tests before returning to the Border to complete his duty.

At the end of his National Service, Nick was surprised to receive instructions to report to the Air Force Gymnasium in Valhalla. Here he began training began in earnest with Harvard fixed wing trainers and the Impala jet, before long Nick had progressed to rotary aircraft ľ training on the Alouette and graduating to the Puma under the guidance of one of the SAAF's legendary instructors, 'Monster Wilkins'.

An operational tour in Rhodesia followed with deployment to the South West African / Namibian Border. Here Search and Rescue, troop carrying and close air support operations became the order of the day ľan intense cycle of briefings and operations with the ever present threat of small arms fire and surface to air missiles.

LZ HOT! is an unrivalled work ľ it relates the drama of recovering downed fighter pilots under fire, responding to the horror of minestrikes with soldiers horrifically injured and needing urgent evacuation, deep penetration operations into Angola in support of South African Special Forces. It also relates the candour of mess life, the characters and incidents that amuse, delivering much needed relief from the demands of operational flying ľ Nick's accounts of mess dinner high-jinks are especially entertaining and will be recognisable to all who have served!

Flying mountain rescue missions and responding to terrifying shipwrecks, a crazed Military Policeman during a casevac, Lithgow takes all in his stride. LZ Hot! is a stunning, captivating read.

About the Author: Nick Lithgow
After an early childhood in Pretoria, Nick reported for National Service duty with the SADF. This saw him deploying to the Border as an infantry soldier with a brief interlude to Pretoria for pilot assessment. Much to his surprise, Nick was called forward for pilot training and this saw him learning his craft on the Harvard and Impala. He soon graduated to rotary with the Alouette and shortly thereafter, in 1977, Nick became a Puma pilot.

At the height of the South African Border War, Nick flew Puma helicopters across the 'Operational Area' conducting troop moves, casevacs, fighting patrols with special forces and more. In the Drakensburg mountain range Nick conducted daring cliff rescues, whilst at sea, he was instrumental in a number of difficult rescues