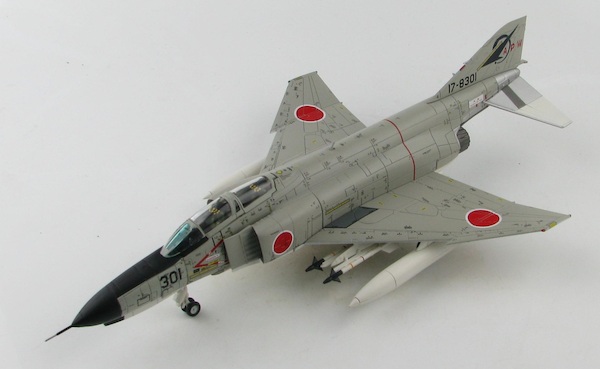 Starting in 1973 the Japan Air Self-Defense Force received 154 F-4EJ
Phantoms that were based on the USAF F-4E. 138 of these aircraft were
manufactured under license by Mitsubishi who produced the last F-4 Phantom
II several changes were made to the F-4E to make it an F-4EJ. Basically it
had any offensive weapons removed but eventually these restrictions were
lifted and the aircraft were updated with missiles and the latest electronic
equipment.


In November 1968 the JASDF ordered the F-4EJ Phantom. The first two
aircraft, 17-8301 and 17-8302 were built by McDonnell Douglas with eleven
others being assembled by Mitsubishi Heavy Industries from parts
manufactured and shipped from the U.S.. The first of 140 Phantoms was
handed over to the JASDF in August 1972 and the last aircraft was received
on May 20, 1981. These aircraft equipped six squadrons. F-4EJ 17-8301 was
sent to the Air Proving Wing (APW) that in 1989 became the Air Development
and Test Wing (ADTW).

They are virtually identical except for the restricted equipment:
This included removal of the in-flight refueling receptacle that was later
retrofitted, no leading edge slats, ground attack control equipment such as
weapons and bomb delivery systems and the addition of modern electronic
equipment including a data link system and radar warning receiver. Most or
all this equipment was eventually reinstalled.

Interesting trivia:
Each aircraft has 54,197 feet of wiring and 643,000 fasteners holding it
together.

Armament:
1 X 20-mm M61A1 cannon with 639 rounds.
4 X AIM-7 Sparrow semi-active radar homing air-to-air missiles in semi-
recessed slots in the fuselage belly.
2 to 4 X AIM-9 Sidewinder infra-red homing air-to-air missiles carried under
the wings on the inboard pylons.
A total offensive load of up to 16,000 pounds could be carried on the
centerline and four under-wing hard-points.