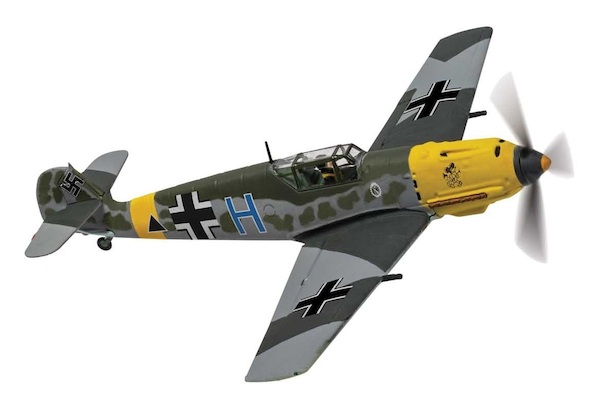 Messerschmitt Bf 109E-7/B 'Blue H' Triangle, II./Schlachtgeschwader 1, Stalingrad, Luftwaffe Ground Support Jabo, Winter 1942/43 As one of the most famous fighting aeroplanes in the history of warfare, the Messerschmitt Bf 109 series is synonymous with Luftwaffe operations during the Second World War and indeed was both constantly upgraded and in constant production for the entirety of the conflict. In fact, the ground-breaking Bf 109 was already in service at a time when most of the world's major air forces still had biplane designs as their front line fighters and incredibly, later variants of the aircraft were still in service at the advent of the jet age. The 'E or Emil' variant of the Messerschmitt Bf 109 was the second most numerous version of the fighter to be produced and the one which served extensively throughout the Battle of Britain and during the massive aerial battles of Operation Barbarossa, the German invasion of the Soviet Union.

This conflict would extend far beyond the six months of Barbarossa itself and descend into a bloody attractional war over vast areas of territory and become a significant turning point in the outcome of the Second World War. During the savage fighting around Stalingrad in late 1942, early 1943, some of these older variants of Bf 109 were adapted to fly close air support missions, acting like high speed dive bombers in support of ground troops who were encountering particularly stubborn areas of Soviet resistance. These ground attack Messerschmitts proved incredibly effective, even though the inexorable tide of incessant Soviet offensives had already dictated the outcome of this struggle.