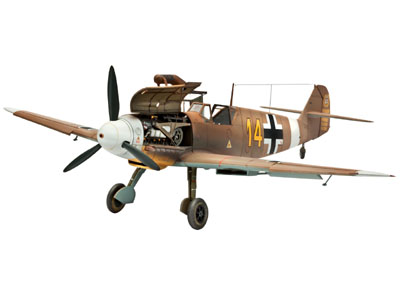 This product was added to our database on Monday 17 October 2011.

The "109" was the "Standard Fighter Aircraft" of the German Air Force during the whole of the War. Its strengths included good take-off performance and acceleration in the dive. The Bf 109E was the first large scale mass production model. A revision of aerodynamics in the nose area including the DB 601 engine resulted in the Bf 109F. From April 1941 onwards the Bf 109F formed the main part of mass production, whilst the F-4 first appeared in June of that year. The F-4/Trop had a Sand Filter in front of the air intake and other equipment for deployment in tropical and dusty areas such as North Africa and Southern Russia. One of the most successful 109 fighter pilots was Captain Joachim Marseille, who was mortally wounded in 1942.