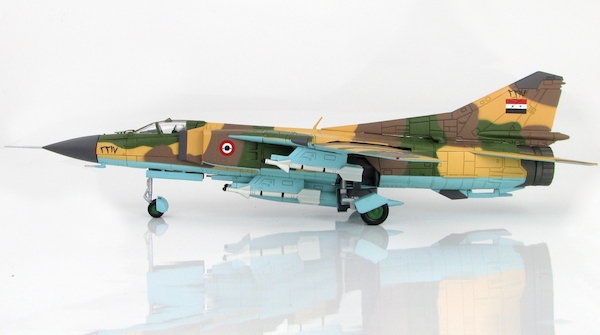 This product was added to our database on Friday 26 May 2017.

In the 1960's the Soviet military required a replacement for the MiG-21 that could compete with
the USAF F-14 Tomcat. It had to be very fast, rapid acceleration, carry a larger payload, capable
of a high service ceiling, long range and beyond visual range intercept capabilities. The project
was given to the Mikoyan- Gurevich Design Bureau that produced the Model 23-11 that first flew
on June 10, 1967. Production began in 1969 and eventually completed over 5,000 swing-wing
MiG-23s. A ground-attack variant was also produced, the MiG-27.


In October 1973 the first new MiG-23MS arrived in Syria. On April 19, 1974 Captain al-Masry of
the Syrian Air Force was on a weapons test mission and spotted eight Israeli F-4E Phantoms.
Realizing he had to attack first he charged the F-4Es breaking their formation. Making a turn as
hard as the MiG-23MS would allow al-Masry rolled in behind some F-4Es. He fired three missiles
downing two but his MiG-23MS was hit by friendly SAM SA-6s destroying the aircraft but some
how al-Masry managed to escape the wreckage.