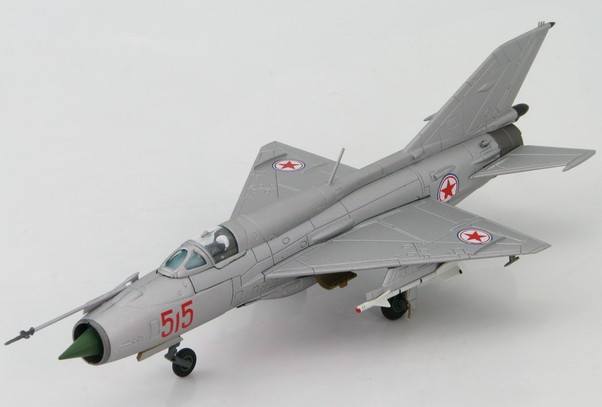 The Mig-21 was originally built by the Mikoyan and Gurevich Design Bureau in the
Soviet Union with a NATO nickname Fishbed. No other jet has had as many planes
produced as the Mig-21. Depending on the reference source 8,000 - 13,000 planes of
all versions were made in the Soviet Union, under license to allied countries and China
without license. A small, fast, agile, dependable and most importantly simple making it
easy to turn out great numbers of the plane.


The MiG-21PFM is the most numerous version of the MiG-21 in the North Korean
MiG-21 inventory. It is used by two regiments each with three squadrons. The
MiG-21PFM has several improvements over earlier versions but still lacks many modern
upgrades. The KPAF is considered to have approximately 200 of these aircraft which
were delivered between 1968 and 1974 and again in 1985 along with some MiG-21MF.
Also in their inventory are some MiG-29s and they are believed to be trying to acquire
some Su-35s.