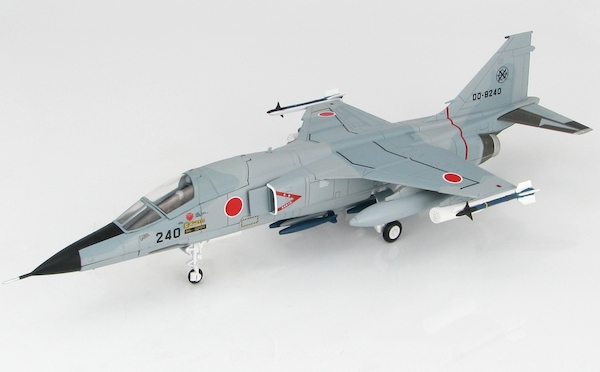 This product was added to our database on Thursday 22 March 2018.

Die-cast metal.
Superb detailing in 1/72 scale.
Pre-painted with pad applied markings.
Fully assembled.
Weapons that are not permanently attached.
Comes with crew figures
Display stand included.
Option to display model with wheels up or down.
Minimum use of plastic.

The Mitsubishi F-1 is a single-seat attack aircraft that evolved from the Mitsubishi T-2
supersonic jet trainer. Its primary task in the Japanese Self Defense Force is anti-
shipping with an air-to-air capability. The F-1 entered service in April 1978 and
production ended in March 1987.  160 aircraft were planned, but only 77 were built. The
F-1 had several upgrades to extend its service life. The F-1 has slowly been replaced by
the Mitsubishi F-2 and upgraded F-4EJ "Kai" Phantom II's. In 2006 six F-1's were retired.


The 8th AW (Kokudan) / 6th Squadron (Hikotai) is located at Tsuiki AB. In 1977 the 6th
Squadron (Hikotai) flew the F-1 aircraft until 2006 when it was replaced by the more
advanced F-2. In 2000 00-8240 took part in the JASDF "Air Combat Meet" which is
similar to "Tiger Meets". It is various teams competing in aircraft against other aircraft in
mock dog fights and attacks on ground targets to determine the proficiency of the pilot
and aircraft. At the closing of the competition they determine the best pilot and best team.


Specifications for the Mitsubishi F-1