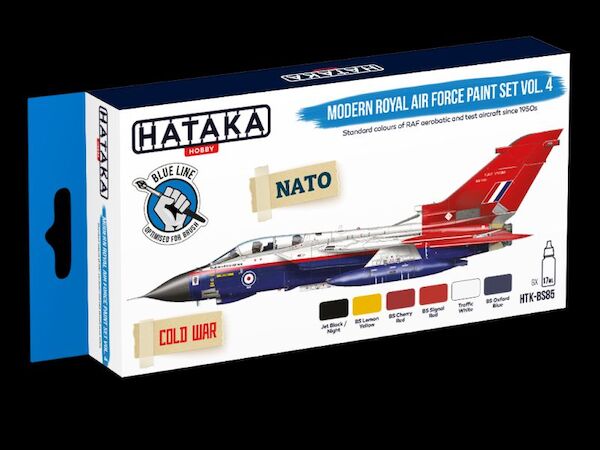 This product was added to our database on Monday 2 September 2019.

Standard colours of RAF aerobatic and test aircraft since 1950s

The Royal Air Force is world-famous not only due to it's combat achievements, but also thanks to supreme quality of it's aerobatic / display teams. Since 1950s the most important teams included: The Black Arrows (formed in 1956, the RAF's premier team until 1961, flying Hawker Hunter), The Yellowjacks (formed in RAF Valley in 1963, existed till 1965, flying Folland Gnat) and the famous Red Arrows (officially known as the Royal Air Force Aerobatic Team, formed in late 1964 at RAF Fairford, part of the Central Flying School, flying Folland Gnat till 1979, since then BAe Hawk T1). Apart from the colours used by the above mentioned teams, this paint set also covers the unique "Raspberry Ripple" livery of British test aircraft flown by ETPS, A&AEE and RAE.