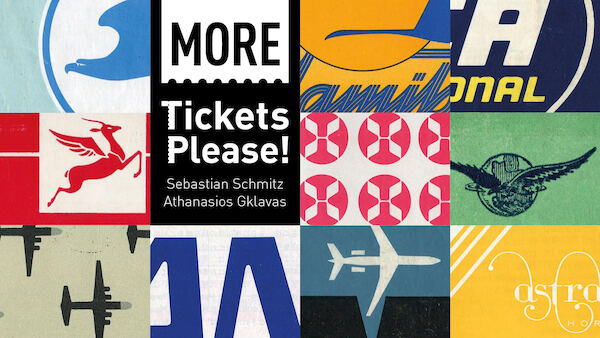 This product was added to our database on Thursday 3 June 2021.

The second edition of airline ticket designs from exotic places like Naura, Nicaragua, New Caledonia, Afghanistan and Burkino-Faso is now in hardback. More new tickets from the biggest private collection of tickets in the world and follows the success of the first edition Tickets Please! Transadriatica, Alitalia, Concorde, Malev, Bursa, Brymon, El Al and Royal Nepal continue the adventure

This extended 176 page hardback covers the gamut of airlines from flagship megabrands to some of the least known operators. Air Ceylon, Tunis, Air Atlas, Braniff, Spantax and Vasp will fly you to the most obscure corners of the world. The tickets all share a sharp eye for colour and design and no aviation library is complete without this book.

In his early late 30s, Sebastian has loved airplanes for as long as he can think and even longer. His second word, approximately at the age of five, was Flugzeug, aeroplane in German, or a slight variation thereof, as he saw the aircraft flying over his head on their way to the nearby Dusseldorf Airport. Not knowing really what to do with his life, he stumbled into a service job with one of the biggest and most fantastic airlines of Germany. Still not knowing what he wants to do with his life fifteen years later, he has stayed there ever since and when not serving passengers chicken piccata or tomato juice, he likes to visit airlines and airports around the globe to write about them. He lives a quiet and peaceful life in a small town outside the German city of Cologne and, should this book become a fantastic commercial success, is seriously looking at a second home in Pyongyang.

Has painstakingly built the most comprehensive collection of airline tickets in the world and has been collecting since the age of 8 years old, after his first flight on an Olympic Airways NAMC YS-11 propjet.

He lives on the Greek island of Crete and was a major contributor to the first edition of Tickets Please! But with the exception of one ticket, he is the exclusive provider for the second edition. He is an aviation enthusiast who loves travelling and has built the airline ticket collection from his own flights, online trading, exchanges and trading with other collector friends plus direct sourcing from airlines. His personal favourites include The Sky Express from Greece and Alitalia's series from the 1980s to 1990s.