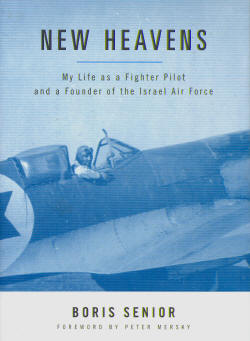 This product was added to our database on Tuesday 2 August 2005.

Although Boris Senior may not be well known outside Israel, he played an important, even vital, part in the formation of the Israel Air Force (IAF) and in the 1948 War of Independence. Those who are familiar with his efforts and dedication have an abiding respect and appreciation for this transplanted South African who nearly died when shot down on a mission in 1945 for the Royal Air Force.

Leaving the RAF after World War II, Senior dedicated himself to the formation of the state of Israel by joining the Irgun to fight British control of Palestine. Originally undertaking surreptitious operations to undermine the governing authority in Palestine, the onset of the 1948 War of Independence had him back in combat, this time against Israel's Arab neighbors. He flew combat sorties in such widely differing aircraft as the Spitfire and, of all things, a Beechcraft Bonanza, a general-aviation type. Senior used his own money to buy supplies and aircraft, personally under-taking multiple dangerous missions to fly new acquisitions to Israel. His tireless work to form an air defense system for the newly formed State of Israel laid the groundwork for the modern-day Israel Air Force.

Through all his experiences, Senior has maintained an abiding understanding of the overall situation that still bedevils the Middle East, particularly Israel and its neighbors. Now, as a senior citizen, his fondest wish is to see the resolution of the age-old problems that result in so many Israelis and Arabs dying in attacks and counterattacks, more than fifty years after he helped launch the IAF.