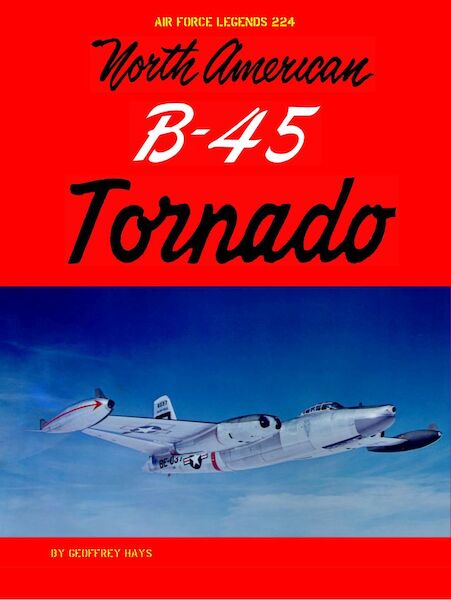 This product was added to our database on Wednesday 2 June 2021.

This 264-page book about the North American B-45 is generously illustrated with 267 drawings, 355 photos, of which 15 are color aircraft images, and color drawings of 33 insignia of units which flew the Tornado.

The book is presented in 12 chapters detailing B-45A, B-45C and RB-45C design, production, performance, payload, endurance and operations as it served as a bomber, reconnaissance and flight test aircraft.

The author delves into the technological difficulties, lack of operational assignments, and politics which plagued the first third of the Tornado's career, from 1947 through 1950. He then presents the Tornado's more demanding and highly successful career from 1952 through 1958, which saw this turbojet develop into a fully combat capable aircraft using an entirely new field of weapons and carrying out a new and essential element of reconnaissance.

Mission details, tail numbers, and markings for aircraft supporting NATO from the UK, such as RB-45Cs which flew Peripheral Aerial Reconnaissance Program missions or PARPRO in Europe. For the first time, serial numbers of all armed RB-45s in the Far East Air Forces and US Air Forces in Europe are covered. And critically important sorties flown by allied personnel over denied territory deep into eastern Europe and the Soviet Union in 1952 and 1954 are also covered in detail.

A separate detailed table presents a list and facts of all known accidents.

Scale models of the B-45 Tornado from 1956 to the present day are presented with pictures of the boxes and a review of each kit.

Geoffrey Hays is a retired USAF officer, Museum professional and the respected author of Ginter Books' sell out title, Air Force Legends No. 215, the Boeing B-50. As with the B-50 book, he once again presents here a detailed, accurate and highly readable history of the USAF's first multiengine turbojet bomber and reconnaissance aircraft, the North American B-45 Tornado.