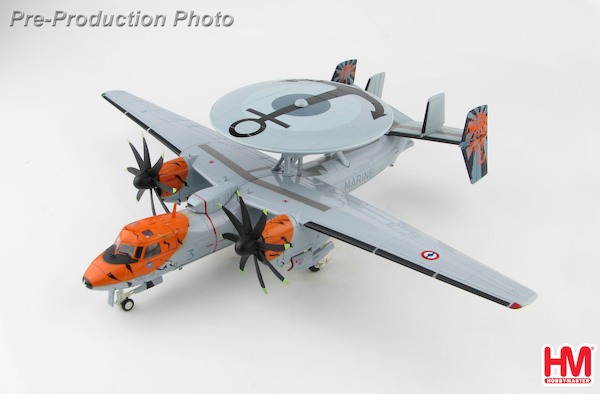 Radar dish can be revolved
True 1/72 scale.
Professionally painted.
Great attention to detail.
All markings are Tampoed (pad applied).
Option to display the model on a stand that is provided.
Model can be shown with the landing gear in the down or up positions.
Optional armament provided.
Pilot figure included.
Extremely heavy metal with a minimum of plastic.


The Northrop E-2 Hawkeye is an all-weather airborne early warning aircraft (AEW). The E-2 was
a twin-turboprop developed in the late 1950's and early 1960's for the USN. The E-2 is a carrier-
capable aircraft and has received major upgrades in their electronics for the E-2B and E-2C with
the E-2C also receiving improved turbo-prop engines. The E-2 has been in production since the
1960's making it the longest production run of any carrier based aircraft. The E-2C variant
became operational in 1973.

The NATO Tiger Meet is an annual event for aviation teams from across Europe and a few other
countries to get together and test and/or improve their skills. The team members include
everyone from ground crew to aircrew. The 2016 NTM took place at Zaragoza Spain hosted by
ALA 15 and ran from May 16 to May 27. The French Navy operates three E-2Cs with E-2C
Hawkeye (3; c/n FR-3/166417 (Navy Tiger) from 4F at Lorient/Lann-Bihoué representing them at
NTM 2016.


Specifications for the Northrop E-2C Hawkeye