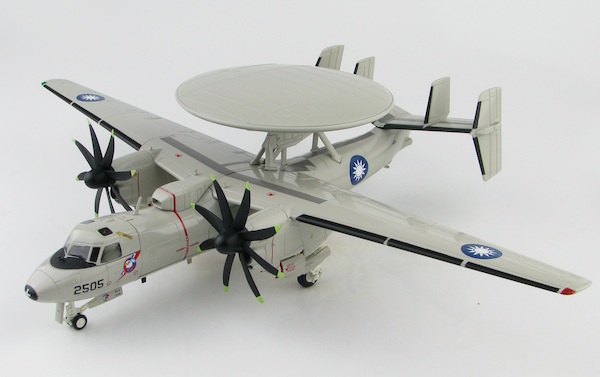 Radar dish can be revolved
True 1/72 scale.
Professionally painted.
Great attention to detail.
All markings are Tampoed (pad applied).
Option to display the model on a stand that is provided.
Model can be shown with the landing gear in the down or up positions.
Optional armament provided.
Pilot figure included.
Extremely heavy metal with a minimum of plastic.

The Northrop E-2 Hawkeye is an all-weather airborne early warning aircraft (AEW). The E-2 was
a twin-turboprop developed in the late 1950's and early 1960's for the USN. The E-2 is a carrier-
capable aircraft and has received major upgrades in their electronics for the E-2B and E-2C with
the E-2C also receiving improved turbo-prop engines. The E-2 has been in production since the
1960's making it the longest production run of any carrier based aircraft. The E-2C variant
became operational in 1973.


Specifications for the Northrop E-2C Hawkeye