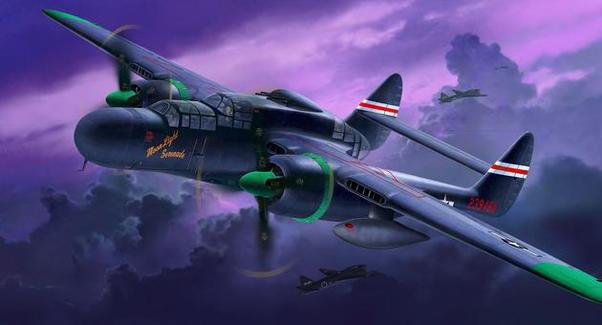 This product was added to our database on Thursday 28 August 2014.

Monogram Classic
The largest and heaviest US fighter of World War II was the P-61. It was initially developed specifically as a night fighter. Its vast arsenal consisted of a rotating gun turret with four 50 calibre machine guns and four 20 mm cannon in the belly-pod. Due to the black paint finish, it received the nickname Black Widow . The Northrop company began preparation of for mass production in 1941 still during the design and development phase of the two prototypes. Production of a total of 726 P-61's ran from August 1943 and included more than 13 variants. The 6th Night Fighter Squadron undertook its first missions in the Pacific theatre starting in May 1944. The 422nd NFS received their first machines in England a short time later. In July 1944, Northrop began series production of a total 450 P-61B's with a more powerful radar and a radar warning device at the rear. 250 of these aircraft were fitted with a turret originally designed for the B-29. A total of 128 aerial victories by the P-61 have been officially recognized. Four of them are still preserved today