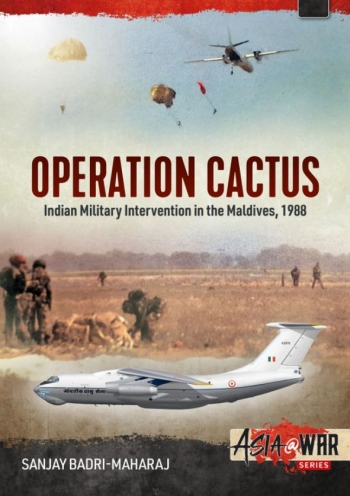 In 1988, the Indian Army and Air Force, ably supported by the Indian Navy, carried out a daring intervention in the Maldives.

Facing an attempted coup by a renegade group of Tamil insurgents from Sri Lanka, the People's Liberation Organisation of Tamil Eelam (PLOTE), the government of the Maldives, led by Maumoon Abdul Gayoom sent out a request for help, to which India responded. Operation Cactus details this, India's most ambitious out of area intervention to date.

Starting with a background of the Maldives, the book describes the history, economy, demography and politics of the islands with an emphasis on the government of the day and the strategic value of the islands to PLOTE as well as the geopolitical ramifications for India in respect to the need to secure its influence in the area.

Operation Cactus details the Indian Army, Navy and Air Force, with particular emphasis on elements that could be used in out of area interventions. The transport assets of the Indian Air Force and the amphibious capabilities of the Indian Navy of the time are particularly noted. Special importance is given to the 54th Air Assault Division, the 340th Independent Brigade, 50th Parachute Brigade, the Paracommandos and the Marine Commando Force along with a brief history of each of these forces and their combat history, their ORBAT in 1988 and their status today. The Maldives National Security Service of 1988 is also discussed and its evolution into the Maldives National Defence Force in the aftermath of the 1988 coup.

The PLOTE attempt to overthrow the Gayoom government is discussed with the resistance it faced from the NSS.

Operation Cactus itself, the intervention by India, is detailed with the operational planning, the mobilization of forces and the force levels committed all discussed. The actual landing in the Maldives, the paucity of intelligence and the force selection are detailed along with the confrontation with PLOTE.

Finally, the flight of the PLOTE insurgents will be discussed as they sought to escape via sea. Their surveillance by Indian Navy MR aircraft as well as their interception by the Indian Navy are described, along with their final confrontation with Indian Naval special forces.

Battle of Laungewala, the real story