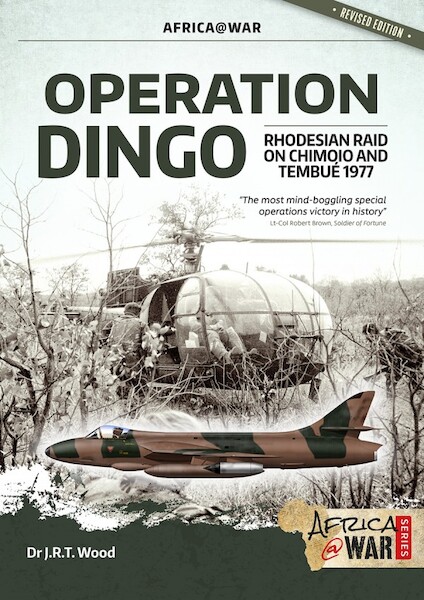 Startling in its innovation and daringly suicidal, Operation Dingo was not only the Fireforce concept writ large but the prototype for all the major Rhodesian airborne attacks on the external bases of Rhodesian African nationalist insurgents in the neighbouring territories of Mozambique and Zambia until such operations ceased in late 1979.

Fireforce as a military concept is a 'vertical envelopment' of the enemy (first practised by SAS paratroopers in Mozambique in 1973), with the 20mm cannon being the principle weapon of attack, mounted in an Alouette III K-Car ('Killer car'), flown by the air force commander, with the army commander on board directing his ground troops deployed from G-Cars (Alouette III troop-carrying gunships and latterly Bell 'Hueys' in 1979) and parachuted from DC-3 Dakotas. In support would be propeller-driven ground-attack aircraft and on call would be Canberra bombers, Hawker Hunter and Vampire jets.

On 23 November 1977, the Rhodesian Air Force and 184 SAS and RLI paratroopers attacked 10,000 ZANLA cadres based at 'New Farm', Chimoio, 90 kilometres inside Mozambique. Two days later, the same force attacked 4,000 guerrillas at Tembué, another ZANLA base, over 200 kilometres inside Mozambique, north of Tete on the Zambezi River. Estimates of ZANLA losses vary wildly; however, a figure exceeding 6,000 casualties is realistic. The Rhodesians suffered two dead, eight wounded and lost one aircraft. It would produce the biggest SAS-led external battle of the Rhodesian bush war.

"Africa@War is a ground-breaking series concept, studying Africa's conflicts and military players in an informative and entertaining manner, examining some of the lesser-known campaigns and shedding new light on some of the better-known operations … great models of what the combination of authors and publishers can produce by way of useable case studies for the market place in a concise illustrated format.  They are recommended as professional military education references."  Charles D. Melson, Chief Historian, U.S. Marine Corps

Heinkel He177"Greif", the only long range bomber in Luftwaffe Service