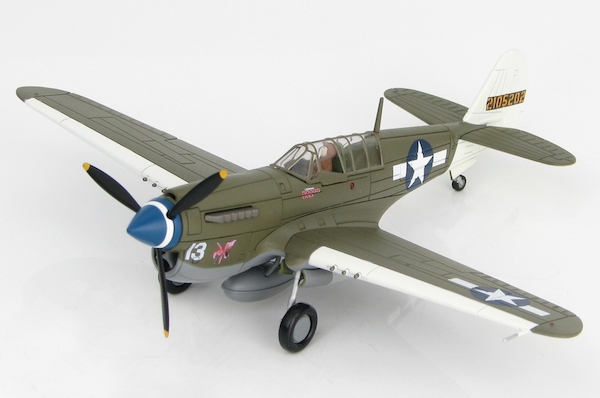 This product was added to our database on Thursday 22 March 2018.

Robert Marshall DeHaven was born on 13 January 1922 in San Diego, California. He attended Washington and Lee University but left to join the Army Air Corps in February 1942. Earning his pilot's wings, he was assigned to P-40 training in Florida. In February 1943 he was sent to Hawaii, then on to Port Moresby, New Guinea via Australia in May. He was assigned to the P-40 equipped 7th Fighter Squadron, 49th Fighter Group at Dobodura.
Lieutenant DeHaved scored his first victory on 14 July 1943 and became an ace on 10 December. He participated in the offensives which took Buna, Lae, Markham Valley, Hollandia and Biak Islands. During these battles, he downed a total of ten enemy aricraft with the P-40.

The 7th Fighter Squadron transitioned to P-38s in July-September 1944 for the Philippine invasion. On 27 October, leading the 7th Squadron, DeHaven became one of the first AAF fighters to "return" to the Philippines. Within seven days he acquired four more victories. After leave in the U.S. he rejoined the 49th at Lingayen as group operations officer, serving into the occupation of Japan.

Following World War II, DeHaven joined the Hughes Aircraft Company as an engineering test pilot and personal pilot to Howard Hughes. Eventually he became an executive of the firm and manager of the Flight Test Division for over 30 years. He was also elected a Fellow in the Society of Experimental Test Pilots and served as President of the American Fighter Aces Association.

TALLY RECORD: 14 Confirmed and one Damaged

DECORATIONS: Silver Star with one Oak Leaf Cluster, Distinguished Flying Cross with 2 OLCs, Air Medal with 13 OLCs, and the Presidential Unit Citation with one OLC