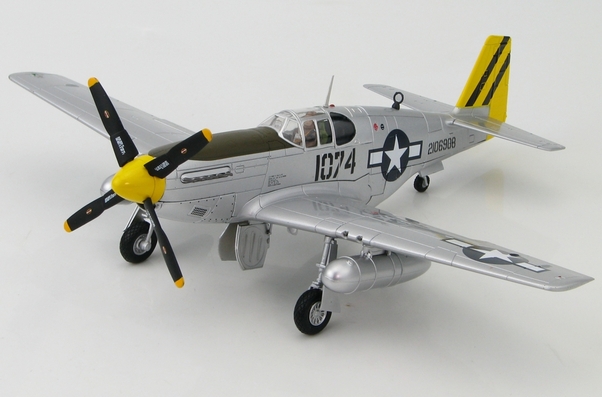 This product was added to our database on Thursday 29 January 2015.


The only difference between the North American P-51B and C variants was the B was built in
Inglewood and the C in Dallas. The B variant first flew on May 5, 1943 and the C variant first flew
on August 5, 1943. The B variant saw 1,988 built while the C variant saw 1,750 built. On
December 1, 1943 the P-51B Mustang flew its first combat mission and in March 1944 provided
bomber escort to Berlin. The high shape of the P-51B/C dorsal spine gave it the name
“Razorback”.


P-51B 42-106908 is considered to be the personal aircraft of Lt. Leonard Randy Reeves of the
530th FS/311th FG based at Pungchacheng, China in 1944 – 1945. Around the end of January
1945 Lt. Reeves was part of two missions to Peking with the second flight resulting in severe
damage to the tail of 2106908. Because of the extent of the damage to this aircraft Lt. Reeves
was assigned another P-51. Sometime during the time that 2106908 was with Lt. Reeves he had
named the aircraft “My Dallas Darlin”.