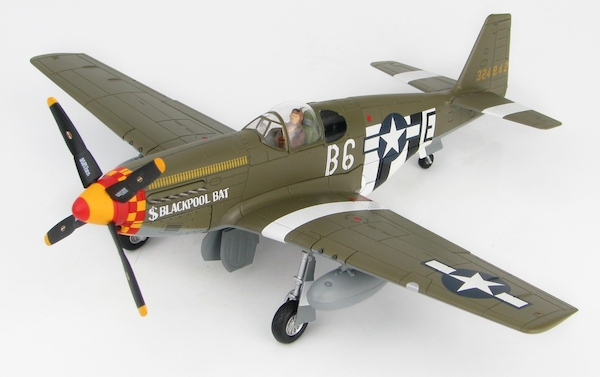 This product was added to our database on Wednesday 12 September 2018.

The only difference between the North American P-51B and C variants was the B was built in
Inglewood and the C in Dallas. The B variant first flew on May 5, 1943 and the C variant first flew
on August 5, 1943. The B variant saw 1,988 built while the C variant saw 1,750 built. On
December 1, 1943 the P-51B Mustang flew its first combat mission and in March 1944 provided
bomber escort to Berlin. The high shape of the P-51B/C dorsal spine gave it the name
"Razorback".


Originally built as RAF Mustang MK. III FX-906 but returned to the USAAF in January 1944 it was assigned to the 356th FS. The USAAF serial was 43-12434 and assigned to Captain Richard Turner who named it "Short-Fuse Sallee" after his short tempered sweet heart. Between January 5 and April 11, 1944, while flying P-51B 43-12434 "Short-Fuse Sallee", Captain Turner managed eight kills and four damaged. In May 1944 43-12434 was reassigned and later Turner stopped using "Short-Fuse Sallee" on his aircraft when he received a "Dear John" letter.