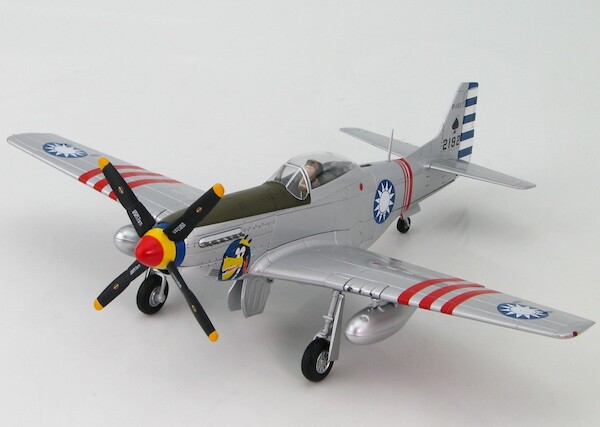 This product was added to our database on Friday 31 july 2015.


Later in WWII the Allied bombers were flying deep into Germany but suffered tremendous losses
because of the lack of range the fighter escorts had. German fighters would wait beyond the
range of the Allied fighters and then attack the vulnerable bombers. Once the P-51 called
Mustang by the British had the Allison engine replaced with a British Merlin it possessed the high
performance that had been lacking. With drop tanks the P-51 had the range to escort bombers all
the way to Berlin and back.

Late in the Sino-Japanese War the U.S. equipped three squadrons of the Chinese Nationalist Air
Force with North American P-51 Mustangs. After WWII the P-51 was used in the fight between
the Nationalists and the Communists forces. By 1949 the Nationalists were losing the war and
retreated to what then was the island of Formosa, now Taiwan. Pilots loyal to the Nationalists
flew their aircraft to the island but 39 P-51s were left behind and became the property of the
Communist PLAAF (People’s Liberation Air Force).