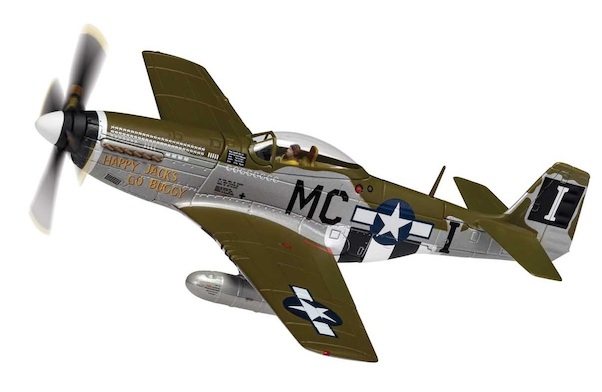 North American P-51D Mustang (Early) 44-13761 / MC-I, 'Happy Jack's Go Buggy', Capt. Jack M Ilfrey, 79th Fighter Squadron, 20th Fighter Group, US Eighth Air Force, Kings Cliffe USAAF Station 367, August 1944 With ace pilot Jack Ilfrey having been shot down over France just six days after D-Day, but luckily managing to avoid capture thanks to the efforts of the French resistance network, he soon found himself in London being interrogated by Allied intelligence officers. It was highly unusual to allow a downed airman to resume combat operations in the same theatre of operations following a successful repatriation, as they were at risk of both placing his helpers in danger and being shot as a spy if brought down again. Despite this, after a short spell touring USAAF airfields to recount his experiences to fellow pilots, Ilfrey found himself back at Kings Cliffe airfield, the commanding officer of his old squadron. The unit had recently traded their twin engined P-38 Lightnings for North American P-51D Mustangs, with the P-38s transferring to the Nineth Air Force for use in ground support operations.

With his Mustang receiving the same 'Happy Jack's Go Buggy' nose artwork as his previous fighter, Ilfrey would not score any further victories flying the Mustang, but he would use it as an unlikely wartime flying taxi. On the way home from completing an escort mission to Berlin, Ilfrey's wingman was hit by flak and forced to make a hasty landing at an abandoned airstrip in Holland. Unwilling to leave the young airman to an uncertain fate, Ilfrey landed his 'Go Buggy' at the same airfield, beckoned his wingman into the cockpit and took off again sat on his lap - he described this as an extremely uncomfortable, but memorable flight back to Kings Cliffe for the pair.