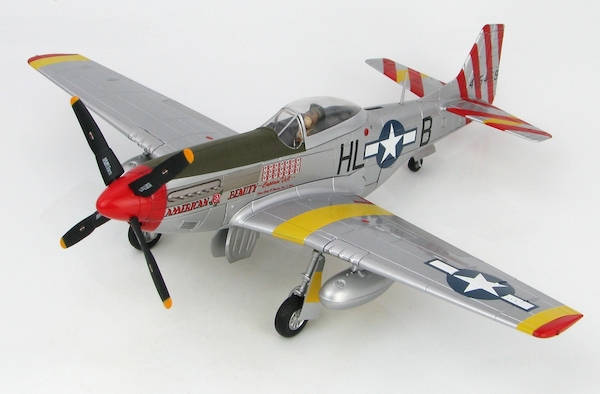 This product was added to our database on Thursday 26 july 2018.

Later in WWII the Allied bombers were flying deep into Germany but suffered tremendous losses
because of the lack of range the fighter escorts had. German fighters would wait beyond the
range of the Allied fighters and then attack the vulnerable bombers. Once the P-51, called
Mustang by the British, had the Allison engine replaced with a British Merlin it possessed the
high performance that had been lacking. With drop tanks the P-51 had the range to escort
bombers all the way to Berlin and back.

Twenty one victories made John Voll the third highest scoring Mustang pilot of WW II and the
highest scoring USAAF pilot of the 15th AF. One month after joining the 308th FS/31st FG he
scored his first victory on June 23, 1944. John Voll scored all his victories flying P-51s that he
named American Beauty, six of his victories flying P-51Bs. Lovely Lila was the crew chief's doing.
On November 16, 1944 twelve fighters attacked John while he was downing a Ju-52. Voll
destroyed two Fw-190s, one Bf-109 and damaged several others.