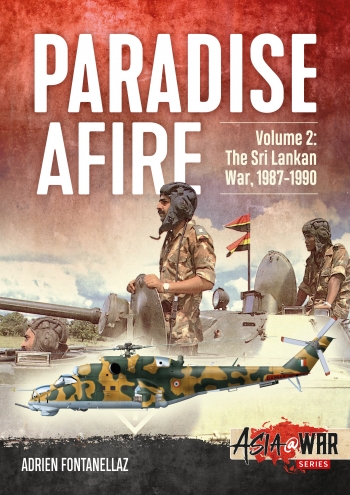 Upon achieving independence from Great Britain in 1948, the stunningly beautiful island of Ceylon, re-named Sri Lanka in 1972, was expected to become a sort of 'South Asian Singapore'. However, stable political order and bright economic prospects proved insufficient to maintain peace. A host of unsolved ethnic conflicts and social inequalities conspired to erupt into an armed conflict in 1971. By 1987, the crisis heated up to the point where the government in New Delhi began exercising fierce pressure upon the Sri Lankan government and the Sri Lankan Tamil insurgents to arrive at a peace deal. In order to help maintain peace, the Indian Peace Keeping Force was deployed on the island. However, with a few weeks, the troops of the Indian Army found themselves involved in a bloody and protracted confrontation with the most powerful of Tamil insurgent movements – the Liberation Tamil Tigers of Elam (LTTE). The peace-keeping operation was thus quickly converted into a military intervention and a bloody quagmire. To make matters even more complex, southern Sir Lanka meanwhile became engulfed in an unprecedented wave of public violence, triggered by the second insurrection of Sinhalese ultra-leftist movement, the JVP. Calling upon extensive studies of the Sri Lankan War, with the help of first hand sources, official documentation and publications from all of the involved parties, this volume provides an in-depth and particularly detailed account of military operations between 1987 and 1990. It is illustrated by over 120 photographs, maps and 12 colour profiles.