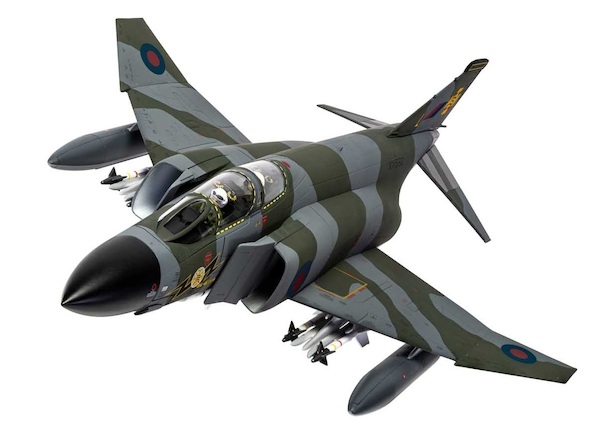 XV592/L, RAF No.111 Squadron, Leuchars, Fife, Scotland, Late 1970s Although some may argue that the American McDonnell Douglas F-4 Phantom was an acquisition which was almost forced upon the Royal Air Force during the late
1960s, Britain would soon come to appreciate the rugged qualities of this magnificent aeroplane and accept that it presented them with a hugely capable multi-role platform. McDonnell Douglas F-4K (FG.1) Phantom XV592 had the distinction of being the last aircraft produced for the Royal Navy and it would go on to serve aboard HMS Ark Royal in the markings of No.892 Naval Air Squadron (as they knew they would be the last unit, they added a large black Omega symbol to their aircraft's tails), until the withdrawal of Britain's last big carrier at the end of the 1970s.

As with the rest of the remaining Royal Navy Phantoms at that time, XV592 would later be transferred to the care of the Royal Air Force at Leuchars in Scotland, where she would perform an air defence role, patrolling the vast expanses of the North Sea, challenging the frequent Soviet incursions into British air space. Her RAF camouflage scheme could hardly
be more different from the extra dark sea grey and white colours she adopted during her Navy days, presenting the mighty Phantom in a much more sinister manner, even though both proved incredibly popular with enthusiasts. Indeed,
Phantom FG.1 XV592 is fortunate to have worn two of the most iconic British Phantom schemes during the service history of this Anglicised American aviation classic.