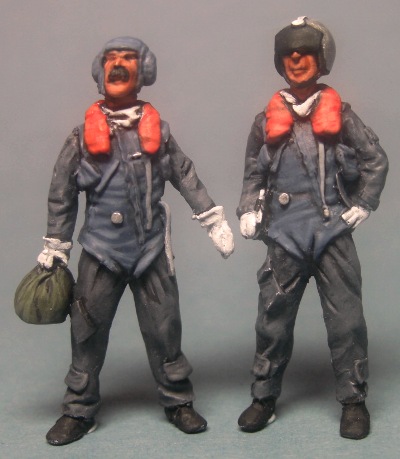 This product was added to our database on Thursday 4 March 2010.

This crew wears the blue cotton flight suit of the early jet age and this suit saw use throughout the late 50’s and through to the mid 70’s. In some squadrons it was a cotton suit with a light open weave, however this could be sprayed with fire retardant spray if needed. Over this he is wearing a predecessor to the G-Suit of the more commonly known type, this is a MK4 pressure Jerkin by Beaufort. Again in blue but a more royal blue than the grey blue of the RAF suit. This had an inflatable built in Mae West in orange around the neck.
This suit was used for high altitude operations and fast jet crews like the Lightning, Buccaneer, Canberra etc. The boots are black leather, though often a rubber over boot could be used, this simply buttoned up over the shoe for use in aircraft ladders in slippery conditions. Though this was most probably originally part of the nuclear biological protection gear and adopted by an innovative aviator.
One of the crew is wearing the full “hardshell” assembly of the MKI fighter helmet or “bonedome” as it is called in the RAF. These were often painted silver in the earlier period, though green examples exist. This is a 2 piece affair designed with a separate hard head protection. This can be seen sported by the crewman with the bag who has his hard shell in a cloth sack, sometimes known as a “bowling ball bag”, due to its spherical shape where it contained a helmet for protection until in the aircraft, these helmets were often used without the hardshell too.
Scarves were common still in this era, though these were required to be worn tucked into the pressure Jerkin and were normally green or white towelling.