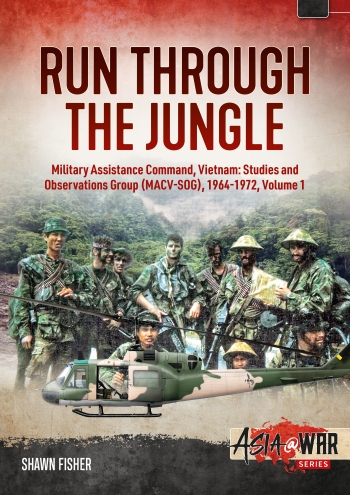 The Military Assistance Command, Vietnam – Studies and Observations Group (MACV-SOG) – was a highly classified, joint-service special operations unit of the United States armed forces, which ran covert and unconventional warfare operations during the Second Indochina War, in the period 1964-1972. SOG, as it came to be known, was the Vietnam War's version of the OSS, the Second World War American spy service, using special equipment, weapons, and highly trained clandestine operatives. Made up of Army Special Forces, Navy SEALS, USAF forward observers and aircrew, South Vietnamese airmen and soldiers, SOG also included a motley assortment of CIA operatives and well-paid mercenaries from the Vietnamese highlands, Saigon's slums, the jungles of Cambodia, and even Norway. Answering only to the Joint Chiefs and the White House, the men of SOG wreaked havoc on the North Vietnamese from the Ho Chi Minh Trail in Laos to the North Vietnamese coastline beyond the 17th parallel. SOG scouted enemy supply lines, tapped communication lines, raided POW camps, spread propaganda and fear with psychological operations, and relentlessly attacked enemy units deep inside its sanctuaries in Laos and Cambodia.

SOG troopers snatched enemy prisoners from their jungle lair and leapt from the sky in the world's first combat use of high altitude, low-opening parachuting rigs. They carried space-age weapons, such as gyro-jet pistols, and honed their jungle survival and tracking skills to a razor's edge, taught by mountain tribesmen to stalk and kill their Viet Cong and North Vietnamese enemies. By the time the unit disbanded in 1972 its elite commandos had been awarded nine Medals of Honor. Over 300 men of MACV-SOG were lost in combat, and approximately 60 remain Missing in Action.

Based on decades-long research in official archives and with help of veterans, Run Through the Jungle is not only richly illustrated, but also the first authoritative operational history of the MACV-SOG during the Vietnam war.