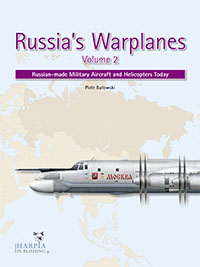 This product was added to our database on Monday 31 October 2016.

Following the success of the first offering in the series, Harpia Publishing presents the second volume of Russia's Warplanes, completing what has become a standard reference work on the subject. Once again researched and written by the acknowledged expert in the field, the book draws upon the author's unrivalled connections within the Russian aerospace industry to conclude this comprehensive directory of the country's latest military aviation hardware.

The result forms an essential companion to Volume 1, which detailed tactical combat aircraft, attack and transport helicopters, reconnaissance and surveillance aircraft, and special mission aircraft including airborne command posts and relay aircraft. Between them, the two works present in full detail the fixed-wing aircraft and helicopters that equip the various Russian air arms, as well as those developed for and operated by foreign states in the post-Soviet era.

Alongside technical descriptions for each military aircraft and every significant sub-variant currently available from Russia's aerospace industry, or otherwise in large-scale service, Piotr Butowski provides historical background and accurate data relating to production and operators around the world. Full coverage is extended to upgrades, as well as the new avionics and advanced weapons that these introduce.

The second volume in the series is dedicated to long-range bombers, including the Tu-95MS and Tu-160 that recently made their combat debuts over Syria, maritime patrol and anti-submarine warfare aircraft, strategic transport and tanker aircraft, theatre transports, and trainers. The work provides authoritative accounts of Russia's current and future strategic bomber programmes, as well as other fascinating types including the world's largest military transport, the An-124, and the new-generation Yak-130 advanced trainer and light attack aircraft.