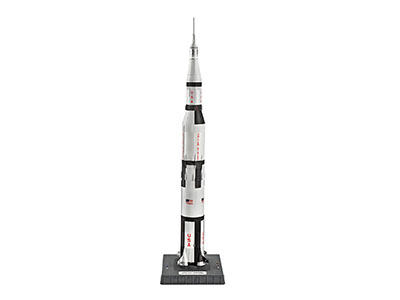 This product was added to our database on Friday 24 January 2014.

At 0932hrs on 16th July 1969 the giant Saturn V rocket was launched from the launchpad at Cape Canaveral on the most important journey in the history of mankind. The giant Saturn V consisted of three main stages, was 110 meters (361 ft) high and weighed 3,000 tons. It could carry a payload of 50 tons and reach a speed of 11.2 km/second (25050 mph). The 394,000 km ( 244,800 mile) journey to the moon took 72 hours. After achieving low Earth Orbit, the upper assembly with the Apollo Capsule received a final push from the third stage rocket thrusters to achieve the speed required for its flight to the moon. Later the Apollo module broke away from the rocket, turned and pulled the Lunar Module from its protective covering. Coupled together like this, the combination eventually reached the Moon and entered Lunar orbit. After several Lunar orbits the Lunar Module with the astronauts N. Armstrong and E. Aldrin on board separated from the Command Module in which only the astronaut M. Collins remained. With two firings of the retro rockets the Lunar Module commenced its final approach into the " Sea of Tranquillity". This historic event will be remembered for eternity.