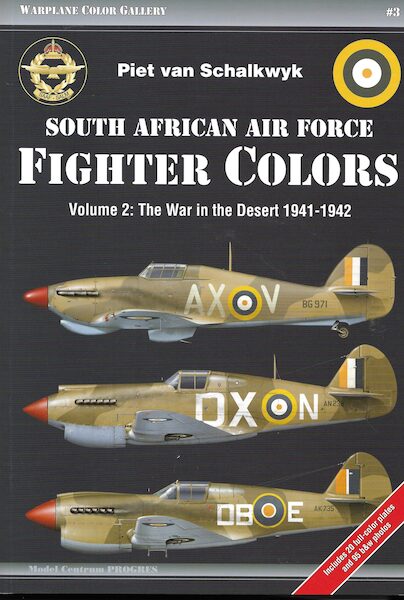 This product was added to our database on Sunday 20 December 2020.

Once the East African Campaign was concluded, some of the SAAF Fighter Squadrons, operating in Ethiopia and Sudan, moved north to Egypt to partake in the campaign in Palestine and the Desert War. 1 Squadron operated Hawker Hurricanes, while 2 Squadron operated the American built P-40 Tomahawks. 4 Squadron also transisioned to Egypt and soon joined 2 Squadron, flying the Curtiss P-40 Tomahawk. These two units were also joined by 5 Squadron, which had been formed and trained in the Union of South Africa. All three these units would eventually fly different marks of the P-40 Kittyhawk towards the end of the campaign. The ferocity of the aerial campaign over the North African desert and coastal plains can be illstrated by facts such as the numbers of fighter aircraft involved. The three SAAF Squadrons alone operated at least around 275 P-40 Tomahawks, that the author had been able to indentify. This was followed by a similar number of Kittyhawk Mk. I and Kittyhawk Mk. II aircraft. The SAAF would also operate more than 160 Kittyhawk Mk. II and Mk. IV fighters in the late stages of this campaign and the follow-up campaign in Italy. The different SAAF squadrons that eventually operated Hurricanes, also operated well in excess of 200 Hurricanes of different models during their time in North Africa.

This volume covers the combat history of these fighter squadrons during the campaign, as well as the colors and markings of their aircraft. Primary sources, such as Squadron War Diaries, Pilot Logbooks, Personal Diaries, Aircraft Movement Cards, Medical and Incident Reports, Combat Reports and Supplementary reports, were used in the preparation of the text contained herein. This volume contains 88 pages, 20 full-color plates and 95 b&w photos, indicating the people and aircraft operated by these squadrons.

The authors have already written eight books covering the colors and markings of the SAAF and SA Army equipment in a series of booklets entitled South African Colours and Markings, numbers 1 to 8.