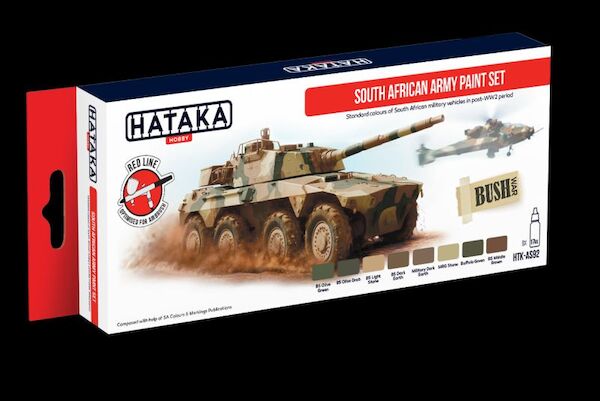 This product was added to our database on Thursday 8 february 2018.

Vehicles of South African Defence Forces between 1961 and 1975 mostly wore overall BS Olive Drab livery, except for the ones stationed in Walvis Bay, Namibia, which were painted overall BS Light Stone (this continued till their withdrawal in 1994). The same colour was used on Centurion tanks and Saracen APCs of Middle East Defence Organisation (MEDO) units, which South Africa briefly formed part of. In the Bush War era (1975-94) BS Dark Earth became a standard SADF colour. After transformation to South African National Defence Force in 1994, the new 3-colour camouflage of Military Dark Earth, MRG Stone and Buffalo Green was introduced to AFVs. It is also used on selected helicopters (incl. Rooivalk and Agusta A109), with different brown colour.