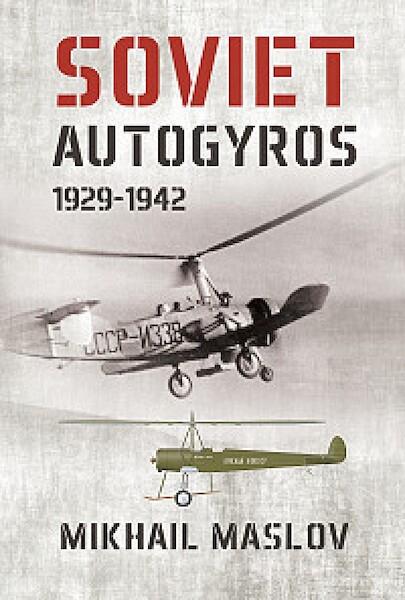 This product was added to our database on Tuesday 4 August 2015.

The material presented in this book describes the history of the development, testing and limited operations of early Soviet autogyros. As in the rest of the world, autogyros appeared in the Soviet Union in a period of full exploration of the skies by airplanes and after the first unsuccessful experiences with helicopters. Enormous hopes were linked to the advent of autogyros among Soviet operating departments in the beginning of the 1930s. However an array of technical factors hindered their active introduction into civil and military service.

The first Soviet autogyro, KASKR-1, which was developed by engineers Kamov and Skrzhinsky, resembled the Cierva design and flew in 1929. It was purely a test machine, aimed at achieving initial experience in this unknown subject. Further efforts on autogyros were concentrated at the Experimental Aerodynamics Department of the Central Aero and Hydrodynamics Institute (TsAGI) in Moscow. A number of Soviet designers, who later became famous for their works on helicopters, were involved in solving the initial problems of autogyro development. Among them were M.L. Mil, N.I. Kamov, I.P. Bratukhin and A.M. Cheryomukhin. Up to 1939, the design group at TsAGI created nine different types of these machines, while a special rotary-wing aircraft workshop built 17 prototypes. Two autogyro types, A-4 and A-7, were built in small series, with the A-7 achieving some success in civil and military use.

In spring 1941 one A-7 was used for spraying chemicals over natural orchards in Kirghizia on the spurs of the Tien Shan mountain range. The first military trial of the A-7 was carried out during the Soviet–Finnish war in 1939–40, when the A-7bis provided correction of fire for the artillery batteries and managed to carry out 20 combat flights. With the beginning of German invasion in June 1941, the Air Force organized new courses for training A-7 aircrew and ground support staff. In August 1941, in accordance with the decision of Chief Artillery Directorate of the Red Army, on the basis of the trained flight group and five combat-ready A-7 autogyros, the 1st autogyro artillery spotting aircraft squadron was formed, which was included into the strength of the 24th Army of the VVS, combat active in the area around Elnya near Smolensk. From 30 August to 5 October 1941 the autogyros made 19 combat sorties for artillery spotting. Not one autogyro was lost in action, while the unit was disbanded in 1942 due to the shortage of serviceable aircraft.