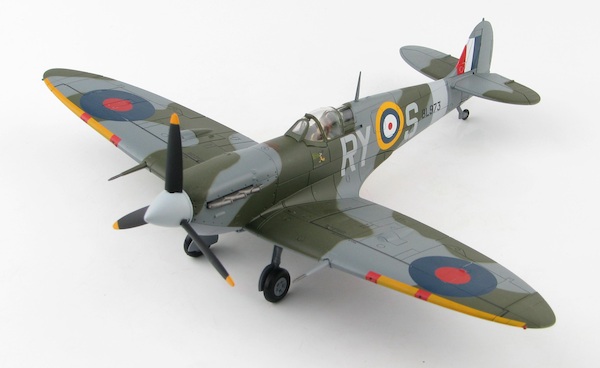 1/48 scale pre-finished.
Die-cast metal with a minimum of plastic.
Professionally painted.
All markings pad applied for superb results.
Canopy slides open.
Comes with a pilot that can be removed.
Comes with display stand.
Landing gear is fully retractable and can be displayed up or down.
Propeller is metal.
Extremely sought after by collectors.


The first Spitfire Mk V was produced in January 1941 and proved to be as good as the Mk III and
less complicated. The Mk V was the most produced variant of the Spitfire and the main version
throughout 1941 and was a better aircraft than the Bf-109 but that all changed with the
introduction of the Fw-190. The Mk V remained the RAF fighter through the summer of 1942 and
saw several variants developed using bigger engines, new wing types and more armament.
There were 20,351 Mk V aircraft built in all variants.

Stanislav Fejfar served in the Czech Air Force and in 1939 escaped to France when Germany
took over the country. With the French Groupe de Chasse I/6 he scored four victories before
going to the RAF when France fell. He was posted to the 310 Squadron where he damaged three
aircraft and shot down one. On May 17, 1942 Fejfar was escorting Boston's on a raid of a radio
station in Wissant in France when he was shot down and killed. Fejfar had become Hptm Josef
Priller's seventy second victim.