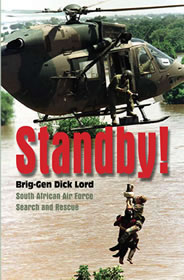 This product was added to our database on Thursday 18 November 2010.

In the air force no mission receives greater priority than the mission of mercy. When lives are at stake all resources available are dedicated to the task. Aircrew, ground crew, paramedics, doctors, mountaineers, navy divers, policemen and trained civilian volunteers are rapidly organized into a rescue team and dispatched with all haste to the disaster scene. This requires training, preparedness, dedication, determination and courage. Rescue missions are often flown in weather conditions that would normally ground all aircraft. Scenarios are as diverse as high-rise fires, mountain, flood and maritime rescues, to white-outs in the snows of Antarctica. Originally published in 1999 as Fire, Flood and Ice, this updated edition includes yet more spectacular South African Air Force (SAAF) search and rescue missions, both military and civilian. Included is the remarkable rescue of all 581 people from the ill-fated liner Oceanos, for which the author was mentioned in dispatches for his role as commander of the rescue operation. Also new are heart-warming accounts of SAAF rescues during the devastating floods of 2000 in Mozambique, which captured the world’s attention