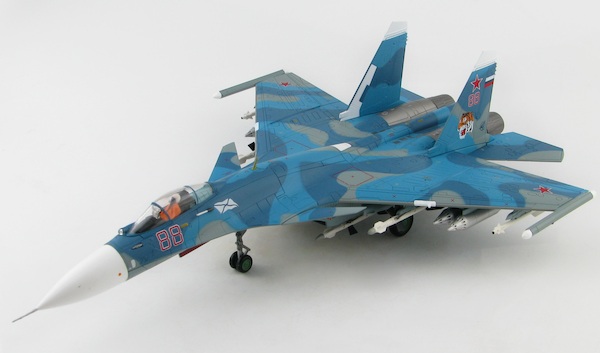 True 1/72 scale.
Professionally painted.
Great attention to detail.
All markings are Tampoed (pad applied).
Option to display the model on a stand that is provided.
Model can be shown with the landing gear in the down or up positions.
Optional armament provided, ECM pods.
Canopy can be displayed open or closed.
Pilot figure included.
Extremely heavy metal with a minimum of plastic.
Highly collectable.


In 1985 the approval was given for a naval variant of the Su-27 that would provide air superiority
for its aircraft carriers. The new aircraft was designated Su-27 (K = Korabelny, Ship Borne) with a
factory designation of T-10K which would later become Su-33, NATO Flanker D. Canards were
added, strengthened frame and landing gear with a two-wheel nose gear. The drag chute was
removed, a retractable tail hook added and wings, horizontal stabilizers and nose cone were
made to fold. A retractable in-flight refueling probe was included on the port side.

Mid October 2016 the aircraft carrier Admiral Kuznetsov and seven other Russian vessels left for
the Syrian coast. On November 15 2016 the carrier and its ten Su-33 and four MiG-29KR/KUBR
aircraft took part in a large operation against ISIS in the Homs area using 500 pound bombs.
Admiral Kuznetsov returned to its home port of Severomorsk in February 2017. During the
deployment Su-33 67 Red was lost due to arrestor cable failure. One of the other nine Su-33s
was 88 Red.