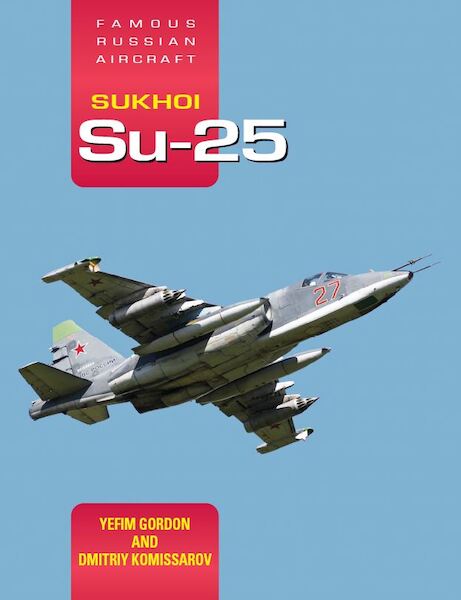 This product was added to our database on Thursday 13 August 2020.

Share this product
Also in this series:
9781910809402Crecy BooksBooks on aviation
Product description

The Su-25 ground attack aircraft made its first flight on 22nd February 1972. After five years of tests the aircraft reached its definitive configuration with new engines, a revised airframe and new armament, entering certification trials which were completed in 1981. A year earlier, however, the initial production Su-25 had received its baptism of fire in the Afghan War.

Gradually the Su-25 became the progenitor of a family. The Su-25UB combat trainer came first; the single-seater and two-seater were also built for export as the Su-25K/Su-25UBK.  A new line of development began in 1979 with a series of single-seat 'tank buster' variants based on the Su-25UB's airframe but featuring more advanced sighting systems and weapons. The first of these was the Su-25T of 1984, followed by Su-25TM (Su-39) of 1993 making the Su-25 in the end the sole Russian light attack aircraft.

The Su-25 has been widely exported, serving with air forces in Europe, Asia, the Middle East, Africa and South America. Apart from the Afghan War, it has seen action in Iraq, Angola, Congo, Eritrea, Ethiopia, Macedonia, Côte d'Ivoire, Sudan and in conflicts between the former Soviet republics. More recently the Frogfoot has been used in the Russian participation in the civil war in Syria War.

The book describes the full development and service history of the Su-25, featuring fleet lists and a design descriptions. It is illustrated throughout with numerous photos and colour profiles.