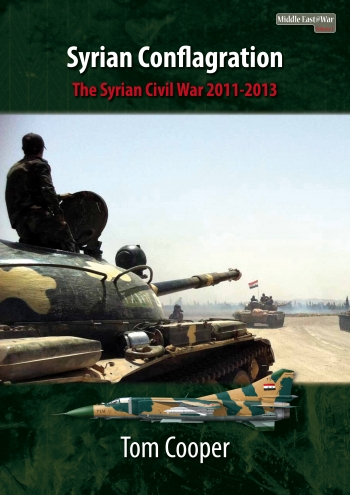 The Syrian Civil War, (the colloquial name of the ongoing conflict in Syria), has experienced an entirely unexpected transformation during its first two years. It started as unrest within the Syrian population and a series of mass demonstrations within the context of wider protest movements in the Middle East and North Africa in 2011, known as the Arab Spring. Contrary to events in Egypt, Libya, Tunisia and Yemen, where oppressive governments were toppled by the end of that year, the government of Syria deployed the full force of its military, its intelligence apparatus, and para-military groups, launching an unprecedented crackdown that resulted in the arrest, detention and killing of many thousands. Despite its brutality, this effort back-fired: it provoked mass desertions of the Syrian military and then an armed uprising. The emerging insurgency was generally successful through 2012, although failing to capture Damascus, it did secure more than half of Aleppo and Homs, the provincial capital of Raqqa, and nearly all of north-eastern and north-western Syria under its control. Although propped-up by economic and military support from the Islamic Republic of Iran and the Russian Federation, the government of Syria was nearing the brink of collapse during the first half of 2013 when, prompted by Tehran, the Hezbollah – a Shi'a Islamic militant group (and political party) from Lebanon – entered the conflict on its side. Soon after, the Hezbollah was reinforced by significant contingents of Iranian-sponsored Shi'a from Iraq, Lebanon and elsewhere, and then by volunteers from Iran, including crack units of the Islamic Revolutionary Guards Corps. Meanwhile, already split along the lines of Syria's complex demography, much of the insurgency transformed from a secular and non-sectarian movement into proxies of various foreign powers, foremost Saudi Arabia and Qatar, but also Turkey and Kuwait. Furthermore, foreign Jihadists motivated by al-Qaida joined the fray, aiming to establish an Islamist state and clandestinely cooperating with the government, they fell into the back of insurgency. Thus, an extremely complex conflict – which meanwhile not only spilled over the border into Lebanon, but is having a major impact upon Iranian-Saudi relations, and relations between the West, Iran and a number of Arab countries – came into being, the outcome of which is presently anything but predictable. Syrian Conflagration is the first instalment in the Middle East@War series. Drawing on extensive research, including first hand accounts it provides a compelling overview of the first three years of the ongoing conflict in Syria. The book features around 120 photos, 16 artworks and 3-4 maps. Middle East@War - following on from our highly-successful Africa@War series, Middle East@War replicates the same format - concise, incisive text, rare images and high quality colour artwork providing fresh accounts of both well-known and more esoteric aspects of conflict in this part of the world since 1945.