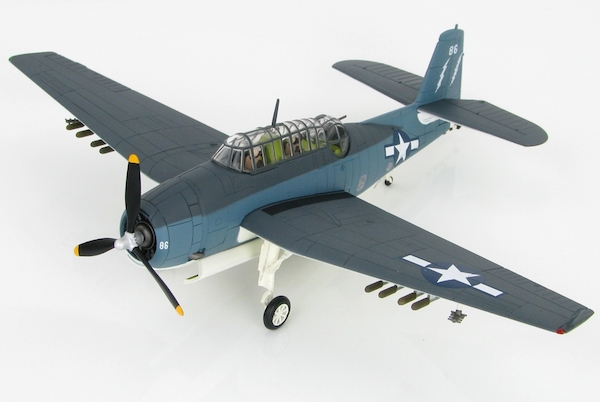 This product was added to our database on Wednesday 25 January 2017.

Die-cast metal.
Superb detailing in 1/72 scale.
Pre-painted with pad applied markings.
Fully assembled.
Weapons are not permanently attached
Bomb bay can be displayed open or closed.
Display stand included.
Option to display model with wheels up or down.
Minimum use of plastic.
Very collectable.

Just prior to the start of WW II the USN started to look for a replacement for their aging Douglas Devastator. Grumman made a presentation of a prototype labeled as XTBF-1 that impressed the USN and they placed an order to purchase. The plane was perfect for the Navy needs, a huge rotary engine that was enclosed in a barrel like fuselage to cut down on drag, and with some increase in the fuselage and wing lengths would accommodate a three-man crew. Production on what was now officially known as the TBF/TBM Avenger and would come to receive the affectionate name of “The Turkey” from the pilots that flew them began in 1941 with first delivery just in time for the Battle of Midway in June 1942. What started out as a carrier borne torpedo bomber soon turned into a close-support bomber, a
patrol aircraft and even a trainer.