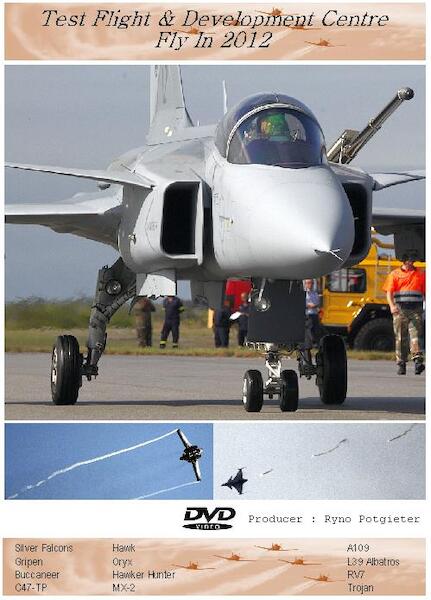 Test Flight and Developement Centre Fly In 2012 (Airshow DVD TFDC 2012)
€ 16.49
EU: incl. tax € 19.95
Reduced shipping charge may be applicable depending on country of destination and contents of shopping cart. Will be shown before checkout.Add to cart

This product was added to our database on Thursday 26 july 2012.

My favourite airshow on the calendar was on 21 April 2012 at Overberg Air Force Base near Bredasdorp. The flying displays included the fourth generation Gripen manufactured in Sweden, the Hawk, Buccaneer and Hunter from Britain, and many others. My favourite displays are at the end of the DVD : the twilight displays by the A109 helicopter and the Gripen C fighter jet.

War simulations are almost standard at South African air shows these days I have always wanted to hear what the a fighter jet's cannon sounds like, and this year TFDC obliged and the the viewer could see the smoke coming from the cannon a little better. What a fantastic second of viewing pleasure. I decided to give the ground troops a bit of footage as well, and you'll see the smoke coming from their rifles, and the puff of smoke as a thunderflash goes off. Oryx and A109 helicopters were involved as well, and you'll see these choppers close up - the A109 airlifting an "injured" soldier.

After a two and a half year absence, Thundercity returned with a Buccaneer and a Hawker Hunter. With the rainy weather at the start of the day, we were lucky to get the yellow Hunter. The wet weather made for awesome vapour off the Buccaneer's wingtips - something that, makes the difference between a good airshow, and a great airshow (the vapour also showing very clearly on the Gripen).