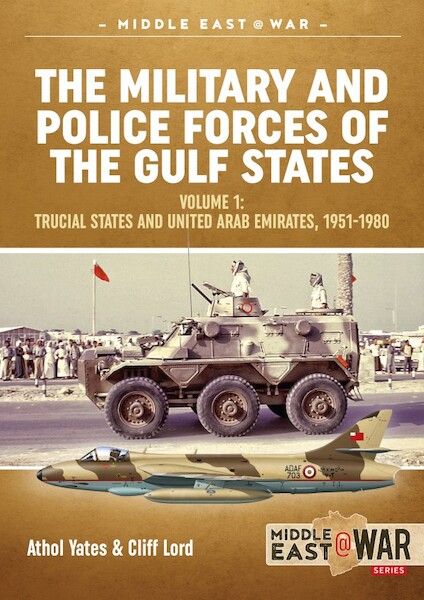 The military and police forces of the Gulf states Volume 1: The Trucial States and United Arab Emirates, 1951-1980

The United Arab Emirates today is one of the safest countries in the world and is acknowledged as a leading Arab military force with considerable recent combat experience. These are amazing achievements given that the Emirates' first military and police forces were established only in 1951 and 1956 respectively. These forces were established when the Emirates were known as the Trucial States, during which time they were a British protected state. In 1971, Britain withdrew its protection and the seven Trucial States' Emirates federated to form the UAE. Before 1971, three Emirates had formed militaries while the British controlled another. After federation, two more Emirates formed militaries with the former British-controlled military becoming the first federally-controlled force. The six militaries were unified in 1976 to create the UAE Armed Forces. The two largest Emirates had established police forces in the 1950s, and the others had all established them by the late 1960s. During the 1970s, police forces of the individual Emirates were increasingly federalised under the newly-established Ministry of Interior, although to a lesser degree than the militaries. Several Emirates during the late 1970s were able to exercise considerably control over the two types of forces in their territory.

This book tells the history of all of these forces, including:

• Trucial Oman Levies, formed in 1951, renamed the Trucial Oman Scouts in 1956, and the Federally-controlled Union Defence Force in 1971

The police forces are:

As a consequence of the British protection of the Emirates which dates back to the 1800s and the engagement of large numbers of British seconded and contract officers up to 1980 in Emirati forces, these forces had a strong British flavour. This can be seen in their rank structure, uniforms, drill, doctrine and organisational arrangements.

Reaching back upon dozens of interviews with veterans with all of the involved services, archival and museum research in Great Britain and the Gulf states, and support from the two Trucial Oman Scouts associations,

'The Armed Forces of the Gulf States, Volume 1' – the first of three volumes in this mini-series – is providing an in-depth history into each service, supported by plentiful of organisational charts and maps.

Except for providing in-depth histories of each force, 'The Armed Forces of the Gulf States, Volume 1' is richly illustrated with exclusive photography, colour profiles and diagrams, detailing the uniforms, badges, insignia and equipment of the various forces over the time. As such it is an indispensable source of reference to the backgrounds on one of major military powers in the Middle East of today.