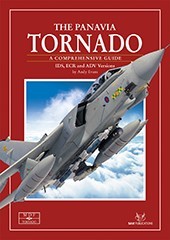 This product was added to our database on Thursday 7 December 2017.

By today's exacting military standards, the success of the Panavia Tornado is quite achievement, and one that made its tri-national programme one of the greatest feats of international military and political co-operation of the 20th century. Rather than being the proverbial 'camel' (otherwise known as a horse put together by a committee), the Tornado has proved itself to be a true thorough-bred, able to deliver 'as advertised' in all weathers. The latter has been the cornerstone of the Tornado's performance, when at its peak, it was one the NATO that could function by night, by day, in fog, in rain or snow, and mount realistic offensive operations. Tornado was conferred with an excellent radar, powerful engines, the ability to carry a large war-load at both low-level and medium altitudes, had a superb short field ability, which offered a compromise between traditional runways and STOL performance. Many historians would doubtless say that the famous De Havilland Mosquito was the original Multi-Role Combat Aircraft, but the arrival of the jet age brought a plethora of new aircraft into the skies. Many designers clung to the 'traditional' one-aircraft-one mission thinking, and therefore air forces found themselves with numerous specialised fighters, bombers and reconnaissance aircraft. As budgets became tighter, many promising projects began to be discarded through financial or political pressures, and several countries began to see the sense in committing to bi-national or tri-national military projects, or alternatively were persuaded to 'buy American'. In Europe, the growing Soviet threat post-War, led Britain, Germany and Italy to agree to produce a single aircraft type, that could fly a wide variety of combat missions, and yet still be tailored to meet the needs of the individual user nations. So was born the 'MRCA' - later Tornado - and a management company, Panavia Aviation, was created to oversee the project, which was for a swing-wing, low- level 'bomb truck', capable of defence suppression, stand-off laser designation, anti-shipping and reconnaissance tasks, with further consideration for a dedicated interceptor variant. The programme was a triumph of co-operation, which incredibly faced few hitches and produced perhaps the greatest aircraft of its type. Proven in battle from the deserts of Iraq to the skies of Europe, as well as in keeping the peace, the Panavia Tornado has a singular history, and up-date programs has kept it flying onto the 21st Century. Now in the last years of its service life, it perhaps a good time to look back on what is, and remains a very fine aircraft, and this new Datafile from SAM Publications brings the Tornado story to life!