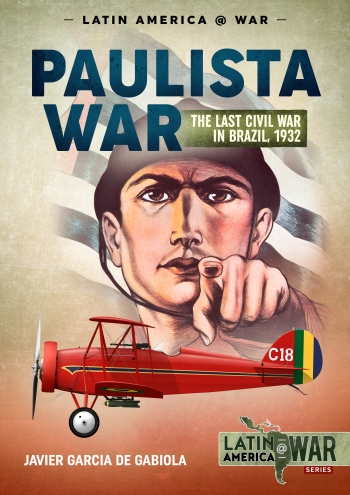 The Year 1932 was not only the year in which the famous carnival of Rio de Janeiro was organized for the first time, or the giant statue of the Christ the Redeemer was placed on top of the Corcovado mountain ridge: tragically, it was also the year of the last civil war fought in Brazil. On 9 July 1932, about 35,000 men from two Brazilian federal states - Sao Paulo and Mato Grosso do Sul – rose in arms against the dictatorship of Getúlio Vargas, demanding the return to constitutionality and democracy. This movement became known as the 'Constitutionalist', while its members became known as the 'Paulistas'. The Brazilian government reacted with brute force: it deployed over 100,000 troops supported by heavy artillery and combat aircraft. The result was the biggest war ever fought in Brazil: the first ever campaign to see strategic aerial bombardment conducted in the Americas; the first aircraft shot down in air combat, and the first to see night bombing operations. Following three months of bitter fighting – which often degenerated into trench warfare – the Paulistas were defeated. Indeed, the end of this conflict brought to the end a period of successive civil wars fought in Brazil since 1889. The Paulista War – the first authoritative account of this conflict ever published in the English language – provides a blow-by-blow account of both aerial and ground combat operations. It is lavishly illustrated with a collection of authentic photographs and exclusive colour profiles, and as such is an indispensable source of reference about this crucial moment in the history of the largest country in South America.